After our coffee break, Sally and I were ready to continue touring!  Next up: Kinkaku-ji, the Golden Pavillion.  We joined the hundreds (thousands? millions? it was a big number) of tourists admiring the Buddhist temple, and I learned that it was burned down in 1950 by a novice monk who was mentally unstable and obsessed with the site.  When we went, it was absolutely beautiful with the sun reflecting on the gold and the autumn leaves as its backdrop. 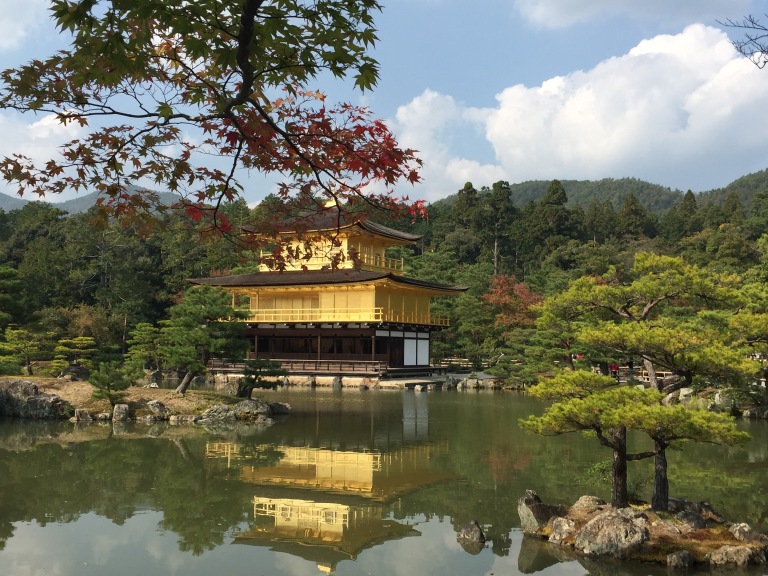 The gardens surrounding the pavilion were gorgeous, and we took some time to enjoy them before boarding a bus back to where we started.  Or so we thought.  After riding the bus for some time, we started to realize that we were slowly heading the totally wrong way.  Woops. I guess that’s what happens when you get directions in Japanese, but don’t quite speak Japanese.

A lesser travel buddy would have gotten cranky at this point, but not Sally.  Instead, she laughed, picked up a second wind, and came up with a new plan.   We had earlier decided that Arashiyama was too far to visit in our short time, but with this turn of events we were now there, and it was beautiful. It was all the way to the west of Kyoto near the mountains with a river running through it.  We joined the many tourists on the river and began to row boat.

From the start, I had troubles with rowing.  I couldn’t figure out how to paddle!  It was like my arms didn’t belong to me–one arm went up while the other arm went straight out to the side, paddles flailing wildly.  These spastic motions sent us straight into the riverbank while other boats, mostly couples on romantic dates, sailed by effortlessly.  How was it so easy for them? I couldn’t figure it out.

We had officially run aground, and couldn’t stop laughing.  Sally tried to explain the basics of rowing, then gave up and took over.  I attempted to stick my arm into the muddy riverbank and push us off, which only resulted in me losing both my wedding rings and being completely covered in mud.  From the riverbank, the men who had rented the boat to us watched in stunned disbelief.

In a few minutes, it all came together.  Through the mud, I saw a sparkle that I recognized as my own ring, and reached for it like Golem snatching for his Precious!  Sally had taken over the rowing and she easily paddled us around the river, like one of the many blissful boats we had envied earlier.  Satisfied, we enjoyed a beautiful setting sun from our boat.  Bliss.

Still giggling, we hopped in a cab and headed to Gion (side note, we used almost every form of transportation for this trip–plane, train, boat, cab, bus!)  Gion is a district famous for its geishas, and we were hoping for a glimpse.

It was late, so we wandered a little bit, saw a few geishas (so shy!), and stopped for pizza.  Yes, pizza.  It was what we were in the mood for.  We walked home from Gion, sleepy from a long, full day. 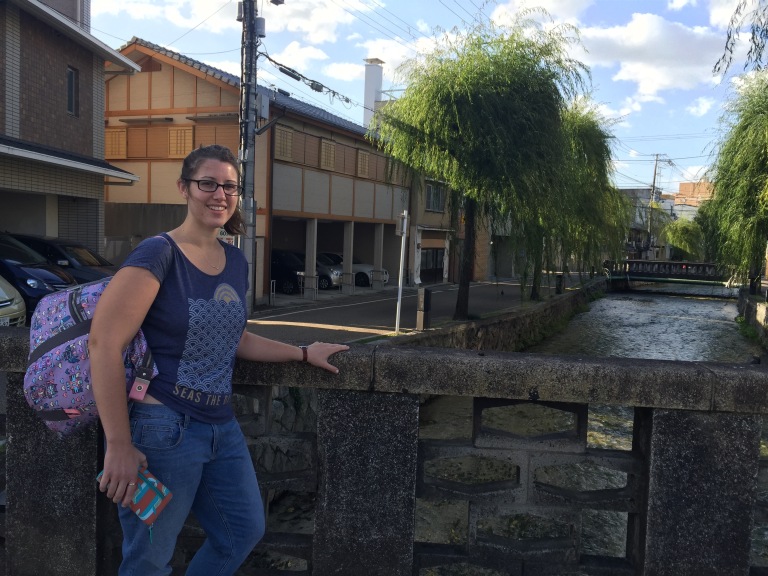 In the morning, we packed up and headed home, not quite ready to leave Kyoto.  It was one of those perfect weekends that you never want to end, and the thought of leaving this perfect place tugged at my heart.  Comforted by the thought that we could return soon, we boarded our flights home to Okinawa.  Until next time, Kyoto.

One thought on “Kinkaku-ji (the Golden Pavilion), Arashiyama, and Geishas”