After weeks of planning, we were finally off!  We’d packed up our things, dropped off our cat and headed to the airport.  The weeks prior had been stressful, especially for Carl, and we couldn’t wait for a vacation.

Our first stop on the trip was Osaka!  Our family friend Ko and her family live there, so we love to visit whenever we can.

Ko was excited to meet Carl for the first time and show him kuidaore (translated to mean eat until you fall over).  We followed close behind as Ko showed us different restaurants featuring fried okonomyaki (cabbage pancake-ish thing) and takoyaki (octopus fried thing, Carl’s favorite).  We ate and ate and ate!  Osaka is famous for it’s fast pace and delicious food, so we naturally partook in both. 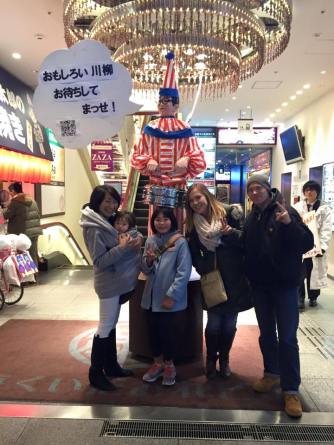 After a night of good food and good company, we parted ways and headed out for some karaoke on Dotonbori Street.  It was definitely different than any American karaoke I’ve experienced: instead of having to perform for an entire bar, we were given our own private room and offered two tambourines.  The host recommended the one hour “all you can drink” special, which for two people totaled around ¥4000 (about $35 USD–probably a better deal for someone who could drink more than us)

At first, we couldn’t find any English songs and we were destined to sing Aaron’s Party (Come and Get It) on repeat.  After a few failed attempts with the all-Japanese remote control, Carl figured out how to add Let it Go and a whole lot of Bruce Springsteen songs.  We both had a lot more respect for Queen Elsa and Bruce after attempting to sing their parts.

Karaoke had taken the last bit of energy we had, so we trudged back to our Air B n B in nearby Namba.   Dotonbori Street was tempting, with its light and energy, but we had big plans for the morning: we were headed to Himeji Castle.